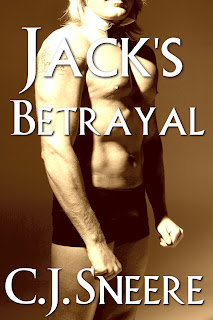 About: It six months later, and James hasn't spoken to Jack in over a week, after a terrible fight. At the urging of his sister, he goes to Jack's place to apologize, only to find the man he loves in the arms of another guy. Seeking revenge, James heads to a sex club for some retribution sex with a stranger. An angry Jack finds him getting oral stimulation from an old adversary. Will Jack and James overcome these betrayals and stay together?

Excerpt: "So when are you and Jack coming over for dinner?" My sister's brown eyes darkened to black and sparkled like jewels. "I've only met him twice, and that was for--what?--all of ten minutes. And Brian is dying to meet him."

My stomach tightened with anxiety. I gave a half-hearted smile and looked away. "Jack and I …" Sighing, I ran a hand through my closely cropped hair. "We haven't spoken in a week. We had a fight--"

Fiona reached over the table, squeezing my hand. "Oh, no. James, what happened?" Her face wrinkled in concern when I met her gaze.

"I … Oh, I screwed up." I threw my fork on the table, shoved my food aside. "I pushed for details about his past. Accused him of being secretive, of not trusting me. Worst of all, I called him a self-absorbed narcissist."

She cringed, apparently forgetting her lunch too as I poured out the story. "Why haven't you called him to apologize?"

I felt my face flush, felt my throat tighten with shame. "I… Truthfully, Fiona? Damn pride." I shrugged. "That and I'm afraid he'll break it off when I do."

She stroked my arm, gently shook her head at me. "James, don't take this the wrong way, dear brother, but don't be like Dad." I flinched at the remark but didn't interrupt. "What I mean is…" She bit her fingernail, and I could tell she searched for just the right way to say this. "Sometimes it hard not to become your parent. You know what I mean? We pick up their biases, their bad habits, just as much as we learn from their positive traits. Don't deny yourself love, tenderness, James. Don't be Dad's definition of a man. Be your own definition. Does that make sense?"

I took her tiny hands in my large ones and gave them a gentle squeeze. "It does, Fiona. It does. Thank you."

She smiled and gave a sigh that sounded relieved. Then she picked up her fork and dug into her shrimp salad. "Now, after we finish lunch, I want you to go right over to Jack's apartment and apologize to him. Oh, and invite him to dinner at our place. Maybe next weekend?"

I grinned, knowing there would be no denying my sister once she gave orders. "I'll do just that."