In Jack's Bed by C.J. Sneere 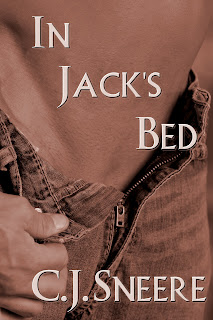 In Jack's Bed
Part 3 of  the Jack the Lad series
C.J. Sneere

Excerpt: I was 16 again, and a long, dark hallway stretched before me. On either side, open doorways lined this corridor, yawning wide like dark, hungry mouths. From the other end of the hall, I heard his voice, and I stood still in terror. My heart rammed against my rib cage. Sweat beaded my brow. I had to force myself to breathe.

"James Ratherton Smith." He only used my full name when he planned to beat me. "You have failed me. You have failed your family. You are a poor excuse for a man."

His footsteps boomed down the hallway. I heard the thwack of a belt hitting his palm. I looked to the left, to the right, peering in the blackness of the nearest doorways, searching for my mother. But she was nowhere to be found, and Father knew that. He always picked days when Mother was out to give me one of his "make you a real man," beatings.

Just as the cruel leather of the belt stung my back, I woke up screaming. Big, warm arms enveloped me, and I almost fought them off, briefly mistaking the touch for my father's. Then Jack's soothing voice joined the caress, and I settled into his strong embrace.

"You okay?" He spoke softly, and I curled tighter against his chest.

"Yeah, I'm fine." I sighed into the fine hair peppering his pecs. "Just a nightmare."

I looked at him, gave a shaky smile, looked away. "My father."

He cupped my chin, tugging at it to make me gaze into his eyes again. His grin was compassionate. "So…what's the deal with your father?"

Jack gave a disgusted scoff and rolled his eyes. "He's stewing in prejudice, if you ask me. And who decides, exactly, what makes a 'real' man and what doesn't?"

I kissed him quickly, glad for his comfort, his nearness. "You couldn't be more right. Dad left the real world a long time ago. For him, it's still 1965, and he's still a young sergeant in the military. Anyone who doesn’t live by his lifestyle rules is wrong."

We talked some more of my childhood, but when I gently asked questions of Jack's life, he evaded the topic. I let it go. If he wasn't comfortable sharing that side of himself yet, I respected that. I couldn't know what he'd been through in his past. Maybe the memories just cut too deep to bring to the surface.