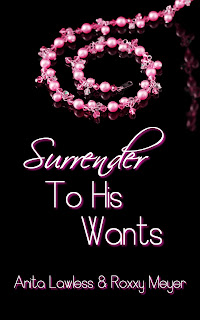 Carrie Brannigan is a single mom with too many bills and two kids to raise. Her only help comes from her best friend Jake Black, a burly carpenter who rents the apartment above her garage. Until she applies for a job testing designer sex toys with a dangerous and sexy dom. In Part 2 of this series, Jake is hired by Dom Luke Wesley also, and things heat up to scorching when he and Carrie must test out pleasure devices along with the enigmatic dom.

Excerpt: “Who was that who called last night?” Jake asks as he slips a hand on my shoulder and an arm around my waist.

I fake a smile. “No one important.” Then I kiss him deeply again, savoring the taste of his lips as my tongue traces them.

Once more I resort to diversion tactics. Call me a coward, but I’m just not ready to tell the man that rents the garage apartment attached to my house about my new boss. Maybe if Jake Black wasn’t so much more than just a renter to me it would be easier. But Jake and I have known each other since high school. We’ve been best friends for years. Why we didn’t end up together long ago--instead of me marrying the high school quarterback Colby Hull--is complicated. I was a less savvy teenage girl and Jake was too shy then to tell me how he felt. Last night was the first one we’ve spent in the same bed.

Well, at least until last night, when I made love to him to distract him from the truth. I feel lower than the bottom of a swamp right about now.

Jake breaks our embrace just as my fingers trail lower, skimming over his belly button and seeking out his cock. “You went from ‘maybe we should wait to have sex’ to seducing me last night and now this morning. Somehow, I think you’re lying about that call.”

“Can’t we just forget about it for now and enjoy ourselves?” I look at the clock before I press my bare, heavy breasts against his warm, muscled arm. “It’s 6 AM. I’ve got to get showered and ready for work soon.” I nip a trail from his ear down his throat in between words. “We’ll talk tonight when I get home.”