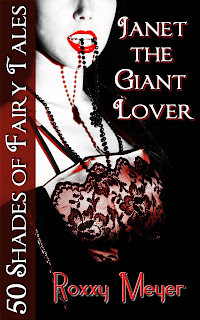 
Excerpt: I like my men big and brawny. Not all over-bulging muscle and popping veins, but, as my Aunt Macy used to say, “Built like a brick outhouse.” Okay, not the most romantic image, but you get the point.

And in my line of work as a tattooist, I deal with a lot of hot, burly giants, but nothing could have prepared me for what happened after Aunt Macy died and she willed me her little bookstore on Granville Street.

Aunt Macy told me, “Janet, when I kick the can, you can do whatever you want with this place.” She’d repeat this on most of my visits, while we had coffee and brownies like only Aunt Macy’s could make them, sitting between dusty stacks of everything from Moby Dick to Her Scottish Rogue. Aunt Macy loved bodice rippers, and she actually wrote historical romance under a few pen names. Along with the bookstore, it covered the bills and left a little over, but she wasn’t rolling in wads of Jackie Collins’ type cash advances. Still, Aunt Macy had been quite content with her life in her small cozy bookstore, with apartment over top.

Now, as I locked my Jeep and walked to the brick building, with its green and white striped awning, a wave of sadness hit me in the chest. I sighed heavily, blew a strand of platinum blonde hair from my eyes, and hitched my backpack over my tank top clad shoulder.

I caught my reflection in the glass door as I unlocked it. One pigtail was higher than the other and my hazel eyes looked bloodshot and bleary. My face seemed paler than usual. I was tired from the long drive up, and my faded jeans were sticking to me in the late spring humidity.
No sooner did I open the door and step into the shadowy store than someone was behind me, grabbing my shoulders with large, slender hands and whirling me around.

“You must go help them!” a tall, almost Amazonian, woman in a billowy, blue cloak whisper-rasped at me.

“Go help who?” I scrambled back from her, trying to get in the door and shut it before she could pull a knife or something on me.

But she shoved a large, booted foot in the narrowing space and grabbed at the candy striped strap of my shirt. “The ancient one from the mountains is coming. It will start a war if you don’t help them stop it!” Then she shoved a tiny drawstring bag made of burlap in my hand. “Take these. Plant them in the garden behind the store.”

And with that, she was gone. Her rubenesque form seemed to float away under the amber glow of the globe streetlamps. But her face remained in my mind. Old world, with big dark eyes that reminded me of an owl, a slender nose, full lips. She looked like a giantess who’d sprang to life from some book of myth and legends.

I opened the tiny sack she’d placed in my palm, finding three white beans inside. At least they looked like lima beans to me. Figuring I had nothing to lose, and not believing fairy tales could ever come true, I went to Macy’s little garden in the back and planted, as my visitor had instructed.

Four hours later, just as I was crawling into an older tank top and shorts with Spiderman on them--AKA my pajamas--the ground started to rumble. I thought Vancouver was finally getting that massive earthquake we West Coast Canucks feared.