Surrender To His Desires 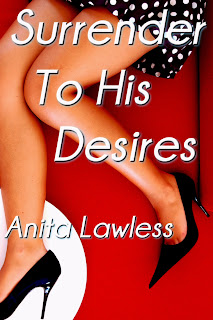 About:  Charlotte Hanson has taken a job as sex mistress to Russian billionaire Dmitri Nichvaldov. Tonight he's going to introduce her to playtime inside the Surrender Sanctuary, an elite resort where the owners of Surrender Inc., a sex resort franchise, come to engage in sex games. But there are a few surprises in store for Dmitri and Charlotte, particularly when someone from Dmitri's past shows up at the end of their show.

I woke up in a massive bed, sliding over silk sheets, while large fingers teased my nipples to stiff peaks. Surprisingly, after our rope play the previous evening, my wrists and ankles bore no marks or burns. I felt a little stiff from our ardent game, where Dmitri made me into a living sculpture by intricately weaving knots all over my body. But the memory of swaying freely inside the hemp swing while we had passionate sex made my minor muscle aches worth it.

"We have to be at work soon," I murmured, after peeling open one eye to glance at the clock. Although we did have plenty of time. His first patient came in at ten, and it was seven now.

The advantage of being your own boss," he said, then paused to flick his tongue over my other nipple, teasing it to attention also. "Is you can be late and no one reprimands you."

He lavished more attention on my breasts, but this time he used gentle strokes. There was passion, of course, but it was of a tender nature this morning. Fingers replaced his tongue, and he tweaked and rolled the now throbbing tips until my breath grew shallow and labored. The sensation woke a fire between my legs, making my clit pulse as it yearned to be touched.
"Are we going to play then?" I looked down at him, watching as he took the nipple between his teeth this time, pulling until my breast rose up from my chest. The sharp sting of his bite was not unpleasant. I gasped when he rapidly flit his tongue back and forth over the hard peak.

"Let's just keep this session unofficial. An off the clock quickie." He smiled up at me before feathering tender kisses down my torso. Then he drew up on his knees and began stroking the length of my damp slit, lightly rubbing my clit, while he watched my face for reaction. "Only I should warn you, a quickie is rarely that quick with me."

And C.J. thanks you for the downloads, readers! He's currently sitting at #1107. Help him get 500 downloads or more, and get him in the top 100, then he'll release his upcoming werewolf series early. Trust me, it'll be worth it! 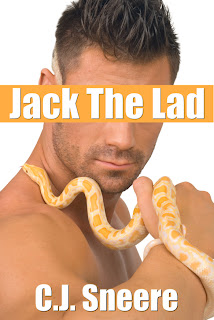 Jack The Lad FREE Until July 25!

James attends his sister's wedding reception, where he tries to avoid the father he hasn't spoken to in six years by ducking outside. Behind a restaurant, he meets chaos in gaudy plaid pants and platform boots. A wild boy who goes by the name of Jack. Up against a brick wall, Jack takes James on a feral ride he'll never forget.

Have a wonderful day, readers! Hope you get up to some naughty fun in the sun.