The Story Of Jack And James 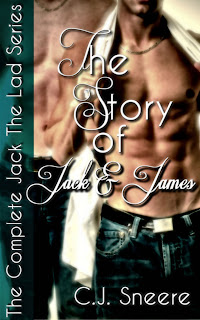 About: The Story Of Jack and James, the complete Jack The Lad series, includes:


Bonus story blurb: You're invited to the wedding of Jack and James. The day of their nuptials includes a quickie before the ceremony and a showdown with an drunken, dejected father. Please join the partners later, in their honeymoon suite, for chocolate eaten off of heated skin and tasty body paint.

"So Anthony's in jail?" I asked Darby, while I fumbled with my bow tie.

He rubbed another dollop of gel into Jack's hair as he replied. "Well, out on bail now. Him and that big bear thug of his. Apparently they ambushed the two strippers, beat the poor bastards to a pulp, and then tied them up behind the bar. Good thing I phoned the guy I booked them through right after we threw Anthony outta the club. Those guys could've spent all night out there, and Anthony and his thug left them in nothing but a g-string."

"When's the court date?" Taylor, Bayside Punks' lead guitarist, piped up, walking over to help me with that damnable bow tie as he did so.

"Not sure," Darby said, following up with a "Sorry," when Jack grumbled "Oww, be gentle with that comb."

"Karma," I said, smiling and thanking Taylor for the help. "I can't believe Anthony went to such lengths to ruin our bachelor party."

Jack's ex-lover, Anthony Cabella, tried to crash our bachelor party by ambushing our entertainment for the night, tying them up behind our friend Darby's bar, and then strolling in the venue posing as the entertainment himself. It had ended in a fist fight between myself and Anthony. Violence also broke out between Anthony's thug, a huge beast of a man, and Jack plus his band mates. Now the strippers and their management were pressing charges against him and his thug, and I couldn't be happier. Whether petty of me or not, I didn't want to see that scheming pair get away with it. Not to mention they'd beaten Jack up in an alley only a few days before this, so I enjoyed the retribution Universe heaped on Anthony's plate.

Darby stood back to admire his handiwork. "Ah, you look killer, Jack." He lightly touched the top of my fiance's spiked, blond hair. "And you could bounce a ball off that 'do, so the wind won't ruin my expertise."

Jack laughed and shook his head. "I'll need James to help me wash this mountain of gunk out later tonight."

Darby waggled his eyebrows. "I'm sure you two will get up to more than that in the honeymoon suite." Then he turned to Taylor and Corey, patted Corey's rump, and said, "C'mon, let's give the pair some alone time before the ceremony starts." They left the room, but Darby poked his head back in long enough to say, "You both look sizzling hot."