Surrender To His Charms 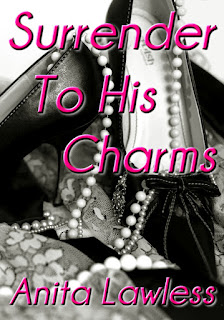 Excerpt: As Mildred, Ryan, and I drew close to Dmitri and his brother, their heated words became clear.

"I don't believe it," Dmitri said, crossing his arms over his massive chest. "I know too well how you work, Yuri, and I won't let you see her."

Yuri exposed white, clenched teeth as he hissed in return, "You can't stop me from seeing my own mother. I've spoken to Father, and he encouraged me to go. He also wanted me to reconcile with you, but I can see that's going nowhere. Look, I know I've asked you for a lot of second chances, but--"

Dmitri cut off his words by stepping so close they were nose to nose. "How's Astrid these days?"

Yuri's fists tightened at his sides. "She left me. But that's--"

This time it was Dmitri's laughter that interrupted him. "Karma, my dear brother. Karma."

"For cripes's sake, Dmitri." Yuri grabbed his shoulder when he went to turn and walk away. "This isn't about our past quarrels. This is about our dying mother."

"Past quarrels?" He whirled back on him, and I began to run in time with Mildred as his meaty fist came up. "You stole the woman I loved."

We arrived too late. Dmitri's fist lashed out lightning quick, delivering a powerful jab to Yuri's nose. Blood flew, spattering Dmitri's still bare chest, staining Yuri's shirt and suit jacket . His brother nearly fell over the side of a seat from the force of the blow. He covered his dripping nostrils and glared up at his enraged sibling.

"Break it up, you two," Mildred said, getting between the pair.

I went to help the fallen man to his feet.

"Get away from him right now, Charlotte," Dmitri snarled.

I looked at him, shocked by the ferocity in his trembling voice. I'd never seen him so full of wrath. I didn't know much about the history between him and his brother, but I had heard the comment from Dmitri: You stole the woman I loved.