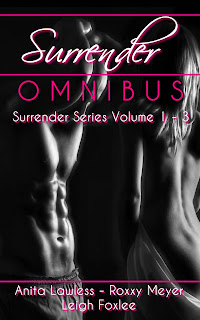 Surrender Ever After, the complete Surrender Series Volume 2, by Anita Lawless & Roxxy Meyer includes all four stories of Carrie Brannigan’s experience as Dom Luke Wesley’s mistress, sex toy employee, and lover. She is torn between him and down to earth carpenter, Jake Black, who also comes to work for the eccentric British dom, and to be seduced by him. Within the halls of Surrender Sanctuary can this trio fall in love, or will hot tempers and guarded hearts force them to separate?

Surrender To His Command (Surrender Series Volume 3) by Leigh Foxlee

Surrender To His Command is Volume 3 of the Surrender series, which continues the story of Surrender Inc., an exclusive sex resort / club franchise where the elite go to play. It is the first stand alone novella in the series, rather than a four part serial.

Excerpt from Surrender To A Sex Therapist

I enjoyed my new job so much it was almost too good to be true. An old friend of Dad's from the precinct, Sherri Taylor, had landed me the interview with Dmitri Nichvalodov, and I'd become the secretary of this prominent sex therapist three weeks ago. At first I'd had reservation about working for him. Not that I was a prude, but I knew little about sex--I'd only been with two men in my life, and one was a disappointing fumbler at best--plus I'd heard Dmitri was a stunner. Being introverted and a social kumquat, my reservations stemmed from the fact there was a good chance I'd stumble over my words, or tip over a coffee table, and make a complete ass of myself. I tended to do just that when I was nervous or intimidated by the subject or persons involved.

However, the salary promised was generous, and it would cover Dad's mounting medical bills. Dad came first, so I swallowed my fear and accepted the position.

"Charlotte," Dmitri said, his green eyes meeting mine, making my stomach do a flutter I tried to ignore. "Would you join me in my office when you're finished up there? I'd like to ask you something."

"Oh, certainly, Mr. Nichvalodov." I adjusted my glasses, thankful they slipped down my nose at that moment, because it gave me a chance to break away from his penetrating gaze.

"It's Dmitri to you." I watched his broad shoulders, clad in a pinstriped suit, disappear behind the door. His long hair gleamed as the sun caught it just before he vanished. He wore his straight, black mane in a braid that fell to the middle of his back. How a psychiatrist managed to look like a male stripper was beyond me. Maybe it had something to do with being a sex therapist. I scolded myself for picturing him out of that suit for the second time today.

Dmitri also came from money, a lot of it, and his family held a history of investing in entrepreneurial ventures that had, for the most part, paid off well. He'd told me, in some of our frequent office conversation, that there had been some risky investments in the early days, and his great-great grandfather lost his shirt a couple times over a hunch that went sour.

However, these days the family had enough wealth to take a million or more dollar loss and not even feel it. They invested a great deal in green energy technology. Dmitri told me the only thing holding green energy back, in his educated opinion, was the lack of funding for researching and developing these techniques.

"Why work as a sex therapist then?" I'd said one day, and when he turned those penetrating green eyes on me, I'd added, "If you don't mind me asking."

Read excerpts from Surrender Ever After and Surrender To His Command also. Just click the highlighted text.