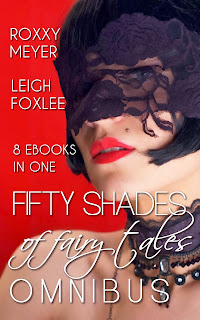 Kat is an insomniac, and the only thing that cures her sleepless nights is sex. One problem: she drains her partners like Rogue from X-Men. But the mysterious bartender she hired has a proposition to cure what ails her, and it includes a wanton night spent in a strange fairyland.

Casey Carpenter's life spins out of control after her husband cheats on her and drains their bank account. She can't afford her condo, her furniture is about to be repossessed, and the only man who can help her is a misfit-turned-model she used to bully in high school. Sparks and shoes fly when the once popular girl becomes a sex maid for this former ugly duckling.

Cindy Eller ditches her pre-Valentine's Day date, the elusive Prince Charming, even though their scorching online encounters have her intrigued. But social anxiety, plus her paranoid step mom and step sisters, make her too terrified to meet the man of her dreams. The prince, however, has a plan to get her in his arms and dole out a sexy punishment for her naughtiness.

Greg Butler is an executive editor who's willing to do anything to climb the corporate ladder. When his boss assigns him to the dreaded Darmoor murder legend story, though, he gets more than he bargained for. A sexy witch named Hans has a story to tell, but if Greg wants his secrets he's going to have to play in Hans' dungeon, and by his rules.

Excerpt from Sleeping With Beauty:

Mike set the drink down in front of me and smiled, showing dazzling white teeth. His steely grey eyes twinkled.

I grinned and played along. "We've been over this before. You're too young." I flipped a straight strand of golden blonde hair out of my eyes and sipped on the concoction, complete with pink drink umbrella, he'd given me.

He hooked a thumb at a guy toward the end of the bar. "It's not from me, sweetheart. It's from him."

Rock your world was the name of one of Mike's specialties, and though I owned this place, I had forgotten what exactly the mixed drink contained. Mike was my head bartender, and I trusted him to take care of such recipes and all things alcohol in this place. He'd been with me three years and the kid had never let me down.

And considering he's only ten years younger than me, I should really quit calling him a kid. How insulting. I can't help myself. Sometimes I feel so much older than my 35 years.

"But you don't look old, Kat," Mike whispered close to my ear, as if he could read my mind. "You look like a foxy 25-year-old Jennifer Aniston."

I waved him off good-naturedly and tried to hide my shiver. How the hell did he do that? It's like he had a direct line into my thoughts.

"Well," I said, pushing the drink away from me. "You can tell him thank you, but no thank you."

Mike snickered and took away the alcohol. "Yeah, he kinda looks like a sleazy used car salesman, doesn't he?"

I laughed. "Yeah, no offense to the guy, but he does."

Mike moved off toward the balding gentleman, who looked like a cross between Larry David and George Bush. My head bartender looked decidedly pleased to be delivering my tactful turndown. Whether the guy really was as sleazy as he looked, I didn't know, and I didn't see the point in being intentionally cruel over a harmless gesture.

Although, by the spreading grin on Mike's face as he returned, and the way the poor jilted guy slinked away from the bar, my employee may have elaborated on my polite refusal.

I shook my head and smiled. That man was incorrigible.

"So, how you been sleeping?" Mike opened up the small dishwasher we kept to wash glasses just under the counter.

I sighed and avoided his penetrating, compassionate gaze. "Not well."

He shook a finger at me. "I could tell the insomnia's back. You always get extra quiet when you aren't sleeping well. And you forgot to do the books. You never forget to do the books on Friday."

I bristled a bit at this, but swallowed down my defensive trigger and joked, "Well, maybe I've suddenly got a life, and now I'm doing the books on Monday."

He gave that deep, throaty laugh I tried to deny had an effect on me. "Sweetie, I know everything about you, and I know you haven't gotten a life yet." His warm, strong finger swept under my chin and tilted my head up.

Uttered by different lips, those words would've come off as creepy. But, from Mike, they came off as caring, concerned, sad about my lack of social outings. I knew he worried about me. Worried that I worked too much.