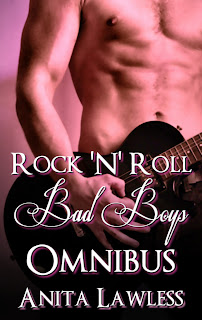 Cherry On Top: Cherry Logan gets the irony of her situation all too well. She's a virgin who just inherited a sex shop. Thanks to a crappy practical joke played by her dead brother, she must now run said adult store for one year, with a gorgeous ex-rock star she hates. This can only end in scorching sexual adventures.

Cherry's First Gang Bang: Wrestlers and rock stars! Oh my! Lenny discovers that Cherry is a longtime EWL fan, so for their eight month anniversary of not killing each other he decides to take her to a wrestling event. But he has an even bigger surprise planned for her afterwards, and it involves three giants wrestlers having their way with Cherry.

Bonus Story: Cherry's Sex Exploration: It's one year later, so Cherry and Lenny must decide who keeps the sex shop and apartment, or if they will continue to share it. Meanwhile, Cherry's Aunt Christie, a financial shark, pays an unexpected visit that creates chaos, but an invitation to a Summer Sex Ball thrown by the elusive Surrender Inc. just might restore harmony between this volatile duo. A dramatic, sex-filled conclusion that will leave readers breathless.

Bad Girl: Chloe Marr is twenty-two and independent. She's tired of her manipulative mother's control games. So when Mom sends Chloe's step dad to try and talk her out of moonlighting as a stripper, Chloe decides to take some pleasurable revenge. It doesn't hurt that said step dad is Peter Magnus, lead singer of the traditional metal band Iscariot's Glory. He's gorgeous, and more than willing to engage in a tempestuous affair with his step daughter. On the balcony of Chloe's apartment, things get scorching hot between them, while an unexpected spectator enjoys the show.

Little Drummer Girl: Vi Campbell loves to drum. She also secretly loves her drummer step dad Jeff Stryker, member of sleaze rock band Acid Kitty. He's her mentor, and is teaching her everything he knows about drumming. He's also letting her crash at his house, despite her mother's death a year ago. Now 21, Vi wants to get her own place. But, she's also tempted to make a move on her step dad. This Christmas, at the urging of her best friend / sometime lover, she decides to make an impromptu road trip into a journey Jeff will never forget.

Naughty New Year: When Mom heads off to Grandma's for the holidays, Randi Jacobs decides to spend the time with her boyfriend Dylan Rogers. For New Years, she and Dylan have booked a weekend at an exclusive sex spa. When they arrive there, however, they meet up with Randi's step dad, Vinnie Corello. Vinnie and his band mates are known for their sexual exploits. With this surprise encounter, Randi hopes she'll be added to her step dad's list of liaisons.

Daddy's Kinky Girl: Chloe Marr and Peter Magnus are back, and this time their tangled up in an ménage with Chloe's step-aunt! It's sex with toys and cucumbers, in another hot edition of Rock 'N' Roll Step Dads.

After Chloe's mom drives her from her apartment in the city, Sarah, Chloe's step aunt, offers her a place to stay. Close in age, these two have a sexual past together that is soon rekindled. When Peter pays a surprise visit, back from his tour with Iscariot's Glory, he finds the girls in a compromising position. And he's all too happy to join in on the fun.

Bonus Story: Ricky's Romantic Surprise: Ricky Moretti and Rhonda Fielding return in this bonus story that finds them on a private island for a romantic weekend. A historic landmark, it's said the island is haunted.

After scorching sex in a graveyard, Rhonda's imagination runs away from her. Another thrilling romp through the forest ensues, then the couple get sweaty and bothered on a window bench.

Reporter Mickie Malloy has her hands full with a juicy story, but she's about to get more than she bargained for when her step father asks her to house sit for him over the summer. He's trusting his step daughter to protect his lavish home from his two unruly twin sons, Hunter and Shane. However, Mickie wonders who will protect her from her lecherous step brothers?