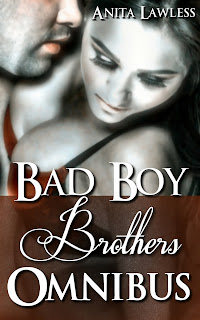 About: Get 3 of Anita's taboo, tattooed step brother series in 1 erotica packed ebook!

Friendly Enemies 1: Deidre and Trevor haven't seen or spoken to each other in six years. The grudge started the night of her prom, when they gave in to teenage lust. But now Deidre's mom, Trevor's foster mother, is in ICU. After Deidre rushes home, the love-hate chemistry she and her foster brother share explodes in scorching oral sex in the hospital parking lot. Later it heats up again in the hot tub back home. Carrots, clit piercings, and 14 gauge dydoes included.

Friendly Enemies 2: Mom's home from the hospital, and she catches Deidre giving Trevor a blow job with the help of a love egg. Mom pretends to unsee the whole thing, then locks herself in her bedroom. Later, a fight between Trevor and Deidre ends in extra dirty sex by a pond. It's all about sex toys, mud, and more orgasms in Part 2 of Friendly Enemies.

Sex Club Surprise: When her best friend Addy talks Mary into a night out at a sex club, the last person she expects to see there is her step brother Shamus. But who should end up between Mary's legs? None other than the sexy gentle giant himself, and long denied lust is sparked between this feisty pair. Will they be able to forget the passionate encounter and keep their hands off one another? More importantly, do they want to?

Sex Starved Sister: What's a girl to do when her step brother's a puckish Lothario who can't keep his hands off her? Mary Quinn isn't sure, but she's certainly having fun figuring it out.
It's the morning after she discovers Shamus moonlighting at a sex club. Following a tempestuous, all-night sex romp, Mary tries to get some answers out of him. True to his nature, her scorching hot step brother uses sex to distract her. This time, things get slippery and steamy in the shower. Edible soap included.

Sex Crazed Siblings: Mary decides to take a more carefree attitude toward this fling with Shamus. She also decides it's time to have sex with other people. Her step-brother's passionate Irish side shows through at this news, and he blows her off after she blows him. But Mary finds revenge waiting on her doorstep, when Shamus' adversary, Roscoe, drops by. She invites him in for her first one night stand, but their fun gets interrupted when her step-brother walks in.

Sibling Jealousy: Shamus cut Mary off, but Roscoe's happy to fulfill her sexual needs. Addy calls Mary, asking if she can get busy with Shamus. Mary tells her BFF to enjoy the ride. That night in the sex club, Mary enjoys watching her step brother pound away at Addy, while she takes on Roscoe and two women. Shamus sees this other side of his step sister isn't going away, and decides to embrace it. Mary tag teams the boys outside the club.

Bonus Story - Sibling Sexcapades: While leaving the sex club, Shamus challenges Mary to a game of truth or dare that ends in a promise to cut ties with Roscoe, and a gang bang proposition. He takes her to a forgotten part of town, ties her up with scarves, then four men have their way with her.
The next day, back at Mary's place, while the pair are going at it, Shamus' father discovers their secret affair.

Sibling Sexilogue: Shamus and Mary Quinn are back in a sexually explosive epilogue to the scorching Oh! Brother series from Anita Lawless. This time they're taking their sexcapades to a red light district in England, where the cheeky step siblings get busy with a girl from a peep show. All this and more in a steamy European encore that may overload your ereader.

Christmas Proposal: Your favorite lusty step siblings are back for a special Christmas edition of Oh! Brother. Shamus wants Mary to move in with him, but their parents have been fighting over the duo's romantic sexcapades. Mary thinks they should break up to protect their parents' relationship. However, Shamus locks her in a pleasure cage at his sex club and promises sexual torment until she changes her mind.

Reporter Mickie Malloy has her hands full with a juicy story, but she's about to get more than she bargained for when her step father asks her to house sit for him over the summer. He's trusting his step daughter to protect his lavish home from his two unruly twin sons, Hunter and Shane. However, Mickie wonders who will protect her from her lecherous step brothers?