Waking Up Werewolf: The Complete Series 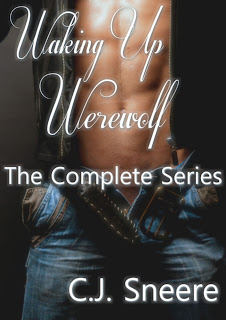 About: Warren Lindstrom has it all--a lovely girlfriend, a great job, a loyal dog--but it all comes crashing down around him after a werewolf attack lands him with lycanthropy and he's introduced to an underground world full of monsters. Now Warren must help a sexy vampire clear his ex-lover, a brawny troll, of a murder rap, plus bring down an organization called Purity, who want to wipe monsters off the face of the earth.

Sid gaped at the handsome vampire standing outside the apartment door. It had been years since he'd seen his old trainer and former lover, Lord Richard. The suave Council Liaison tipped his dark gray bowler hat at Sid and asked, "May I come in, old friend?"

Few monsters could make Sid dry in the mouth, make him stammer and feel like a young school boy, but Lord Richard could. The vampire had been turned during the Victorian Era by a rogue attack. Much like Sid, he'd never known his maker, but recruits from Underground had seen the rogue attack perpetrated on Lord Richard and had brought him into the arms of the monster society long ago. He was a dapper gent who always wore a three piece suit, usually pinstriped. He sported a gray ensemble today, complete with a polished cane made of walnut wood.

"Lord Richard." The words came breathy from Sid's lips. "Of course, come in." He stepped back from the threshold, hating himself for being struck stupid by this surprise visit. "What brings you here?"

The Council Liaison walked past him and surveyed Sid's bohemian surroundings. He ran fingertips across a dusty wall shelf, ran his thumb over the fuzzy results, and raised an eyebrow at Sid. The vampire simply smirked and shrugged at the Council Liaison, who stepped farther into the main room.

He took his name from his favorite Shakespearean play and the brief King of England, Richard III, but he added "Lord" instead of "King" because he liked the sound of the former better. Of Richard, he always told Sid, 'The most slandered king in England's history. How can I not admire him?'

"Why is it you never keep a couch, Sidney?" he asked drolly, before he sat down on the floating bed that served as the area's main piece of furniture.

Sid gathered some pillows together on the floor and sat opposite his guest. He knew the effect Lord Richard had on him, and considering his pact of faithfulness to his two partners, he thought it best to avoid temptation.

"You haven't answered my question yet," Sid said. "Tell me why you're here, and I'll tell you why I never keep a couch."

Lord Richard smirked as he removed his hat and placed it beside him. He smoothed a hand over his slicked back hair, which shone a rich mahogany under the glow of a wall lamp. Sid knew his former teacher was making him wait, purposely taking his time. Lord Richard liked to make him sweat.

Finally, he said, "I've come with a special request from Council Headquarters." Then he leaned his elbows on his knees and bent forward, bringing his face close to Sid's. "But why sit so far away, friend? Come." He patted the pillows on the floating bed. "Sit with me. Let's get … reacquainted."