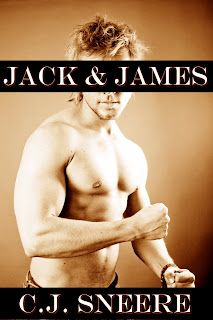 About: After James returns from the alley, his sister Fiona breaks up an argument between him and Dad, helping him escape questioning. But she wants answers about that pearly stain on his blazer, and as to why he's ditching her reception. The next day he phones to confess what happened in the alley. Fiona encourages him to call this bold mystery man. When James does so, he's invited by Jack to a club in a part of the city unknown to him. There he meets Jack's band mates. On a pool table in the smoky bar, Jack and five men have their way with James, loosening up in ways he never thought possible. The orgy lasts all night long.


Excerpt: I buttoned my blazer, checked my dark brown crew cut in the window glass, and headed back inside the restaurant. Keeping low, I crept through the kitchen, hoping no temperamental cooks spied me before I made it into the main dining area.

Breathing a sigh of relief, I sped-walked past the open banquet doors. In my mind, I said an apology to my dear sister, Fiona, for not saying goodbye or giving her and the groom, Brian, best wishes. I'd phone her later tonight and gush profuse I'm sorries. Hopefully the wide screen HDTV I'd bought them as a wedding gift would appease.

I almost skipped down the foyer, to the exit, when I heard the scraping of a throat. "Exactly where have you been?" I knew that disapproving tone anywhere.

The scared little boy in me threatened to surface, but I hushed him, told him to be brave. Then I willed my heart to a normal beat, commanded my hands to quit shaking, as I turned to face Father.

"Look, not now. Not on Fiona's special day. Let this be about her, not you. I'll explain when I can."
He spit and blustered. His flabby jowls flushed red. "Excuse me? You will not take that tone with your father--"

"Get over yourself, Dad." I waved him off. "I haven't lived under your roof, or rules, for a long time."

Just as his mouth gaped like a dying fish, my sister poked her round little face around the banquet room door. Her large, black-brown eyes seemed to bulge, and she held up her wedding dress train as she neared. When her small hand touched Dad's shoulder, he stopped mid-screech.