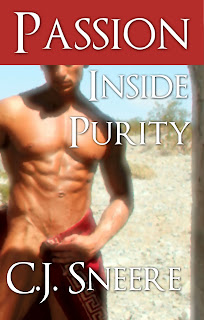 About: Warren had a perfect life, until he became a werewolf, witnessed the murder of a supernatural, & fell in with a brawny troll & sexy vampire. Now this trio must fulfill a prophecy to bring a monster murdering organization down. That is if they can keep their hands off each other, and keep from killing each other, as jealousy, betrayal, and temptation rages. A new urban fantasy erotica series from C.J. Sneere. Welcome to the underground, where monsters rule and sex becomes an adventure.

Excerpt: An image of the troll and werewolf drifted into his mind as they arrived on the island after nightfall. Ethan tried to shield the vision from his lover, his master, Grant Digby, lead scientist behind the Purity organization. Long ago Grant had started experimenting on himself, stealing traits from monster DNA and infusing his genetic material with these abilities. Now he was a modified human, and much like the supernaturals he'd stolen from he could now see monsters' thoughts and read their minds.

If he saw what Ethan now saw, he'd send him and Drake out there after the troll and werewolf. The triad had been split and weakened, just as Grant had wanted.

Right about now, Ethan wished he wasn't extra sensitive to monster energy signatures. Being a werewolf himself, he'd picked up on Warren the moment his feet touched the island. Once, not so long ago, he'd have already told Grant of their presence. But now, after all the hypocrisy he'd seen inside Purity's walls--monsters slain for their DNA, which was then injected into humans rich enough to pay or naive enough to volunteer--he kept quiet. Purity claimed to hate the very creatures they coveted the qualities of, claimed to want to wipe them from the face of the earth. The latter was true, but what Purity kept secret was the fact they stole DNA from these slain creatures and used it to create modified super humans.

Grant lounged on the couch after their lovemaking. The rainforest troll, Drake, still sulked in the corner of the vast leather sofa, and after what Grant had made him do, Ethan couldn't blame him for his foul mood. Drake had been forced to kill his own father, Bastian, leader of the Council Hunters within the Underground. Forced to murder all for the sake of a cause that wasn't really his. Ethan could no longer stand this manipulation of himself and his troll lover by the modified human.

Then Grant reached out and touched his knee and Ethan's heart sagged in his chest. The scientist saw what he saw. A sinister smile spread across the handsome face of the Purity leader.

"They're here." Grant's maniacal smile grew wider. "And it's just the two. My plan worked. The triad is weakened." He leaned over and kissed Ethan's forehead. "Thank you for sharing your vision."

The werewolf shivered, feeling repulsed by a touch he once craved.

"Boys." Grant gathered Ethan and Drake close to his sides. "Go out there and get me a pair of trespassing monsters. Their DNA will be a wonderful addition to my personal collection."