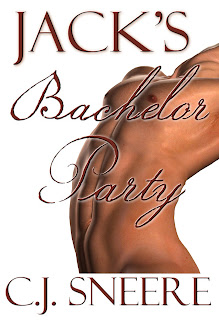 Excerpt: After lighting the two white pillar candles perched on the table, I blew out the match and cast a worried glance at the clock. Jack should've been home from his studio by now. He said he'd be back by 6:00 pm, and it was 7:10 pm. It only took him twenty minutes to walk home from the place, so he insisted on strolling rather than taking a cab. I protested this at first, since the area he had to pass through was rougher than our neighborhood. But Jack just said, "James, you worry too much, love. I know these streets like the back of my hand. Relax."

As of today, we'd been living together ten months, and I had cleaned the apartment, cooked a special dinner, because I planned on proposing to Jack, my punk rock lover, tonight. He had no idea I had anything special scheduled, so maybe he stopped off with his band mates for a drink, I reasoned. Still the niggling doubt wouldn't go away.

The doorknob rattled and I rushed to the entrance, opening it before he could. When I got a good look at him, my heart plummeted to my stomach. "Jack, are you all right? Christ, what happened?"

I wrapped an arm beneath his and slung his arm over my shoulder. Then I helped him in our apartment. His face was swollen, purpled, and cut on one side. He stood hunched as he limped into our home.

"My fault," he croaked. "I took the shortcut home. Went through that alley next to Fergie's Diner."

"What were you doing there?" I gently lowered him onto the sofa. "You know that area is rougher than rough. Crazy bastard." I unlaced his boots and eased both off his feet.

"Oh, stop fussing." He waved me off. " I know. I know. Should've taken a cab. Shouldn't have taken the shortcut. I'm just a bit bruised is all. A few kids swarmed me, but I managed to fight them off. They were young and small. Hell, I even saved my wallet."

"You look more than bruised, Jack Randall." Before he could say another word, I headed to the bathroom to get the first aid kit.

As I dug the small box out of our medicine cabinet, I heard him say, "Ohh, candles. What're we celebrating?"

In the bathroom mirror, I watched my eyes grow wide. I'd completely forgotten the table, the nice dinner I had cooking, the ring sitting on Jack's plate. With first aid kit in hand, I rushed out to the living room. I didn't want him to see the small velvet box until I cleaned up his wounds.

"I've got a special night planned. But we'll get to that later. Let's fix you up first." I knelt in front of him and gently turned his head so he faced me. I daubed some liquid onto a cotton ball and wiped the smear of blood from his cheek.