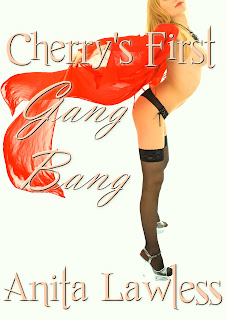 About: Wrestlers and rock stars! Oh my! Lenny discovers that Cherry is a longtime EWL fan, so for their eight month anniversary of not killing each other he decides to take her to a wrestling event. But he has an even bigger surprise planned for her afterwards, and it involves three giants wrestlers having their way with Cherry.

It was the first day of summer reading break, and I'd decided to spend it in bed, watching my old wrestling DVDs. Lost in sweet nostalgia with sweaty, muscled men was the only place I wanted to be right now. Once upon a time I'd had the whole collection on battered VHS tapes, but one Christmas my father bought me the set on disc, before my tapes conked out. I'd watched them until my now dead machine nearly ate the thin, magnetic strip within.

Just as The Juggernaut pounded Jim "Big Man" Davies into the mat via a fierce choke slam, I heard Lenny walking up the hall. He spoke loudly to himself, and he appeared to be cursing our supplier out as he did so.

He knocked on my door, but didn't wait for me to say, "Come in" before it swung wide and he stalked over the threshold, all scowls and huffed breath.

"You're back early," I said, turning the volume down on the match as he plopped himself beside me on the bed.

"I told that bastard to shove his stock where the sun doesn't shine." He grabbed some extra pillows I had piled on the quilt and got comfy. "We'll go with Tank's Love Train from now on. We've never had a problem with their deliveries before."

I nodded, then focused back on the match. We'd already agreed on this modus operandi before he left for the powwow. "Sounds good to me. Like we said, if he's gonna dick us around, we'll just kiss him goodbye."

Lenny nodded then frowned as he focused on the TV. "What are you watching, Cherry Logan?"

I laughed at his faux hoighty toighty tone. "What does it look like? Wrestling."

He chuckled, gave me a curious look, glanced back at the screen. "You? Wrestling? I never pictured you as the sort of girl who watched this stuff."

I gave him a sideways glance, wondering what he meant by that exactly. "What've you got against wrestling?"

He held his hands up. "Oh, nothing in the least. Some of my best friends are wrestlers." When I cast him a glare, in case he was being sarcastic, he added, "No seriously, I know some guys in the EWL."

"Really?" I perked up at this, sitting so I now face him on the bed. "I don't follow it like I used to, but I just loved the EWL as a kid."

He gave a wide smile, looked me up and down. "And here I always thought, when it came to men, you'd be all about business suits and $500 haircuts."

I scoffed, playfully swatted his arm. "I've slept with you, haven't I?"