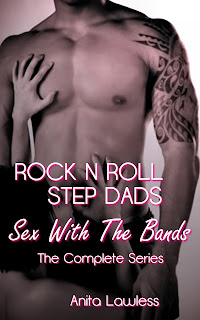 About: Rock 'N' Roll Step Dads The Complete Series includes all five stories in the series, plus a bonus story: Ricky's Romantic Surprise. Loads of steamy sex and scorching, dirty foreplay. Your ereader may get singed corners. This collection includes:

Ricky Moretti and Rhonda Fielding return in this bonus story that finds them on a private island for a romantic weekend. A historic landmark, it's said the island is haunted.

After scorching sex in a graveyard, Rhonda's imagination runs away from her. Another thrilling romp through the forest ensues, then the couple get sweaty and bothered on a window bench.

Ricky seduced me here with promises of sex in the woods and spooky ghost stories tied to the island. Now, as I stared at a tombstone carved to resemble a smiling woman, a thrilling shiver danced up my spine.

"Ever have sex in a graveyard?" he whispered, then his tongue traced the contours of my ear before he poked the tip deep in the canal.

I giggled and caressed his arms. "Actually, it's always been a secret fantasy of mine." I looked up at him. "But… wouldn't it be kind of disrespectful?"

He chuckled at this and kissed my forehead. "I don't think the dead will mind, sweetie."

He had a point there, and I wasn't going to argue when the possibility of outdoor sex loomed. Something about fucking in the open always appealed to me. Not that I'd had the chance to do it often. But the warm, spring air kissing my skin, and the thrill of being exposed, all made me anxious to get naked.

Twilight spread orange light over the island, and we still had some time before full dark drifted in. Ricky took my hand and led me to a patch of thick grass, near a smooth, wide tree stump.

The evening was heavily scented with the clean, sweet smells of pine and wild flowers. We dropped our backpacks near the stone footpath that led to the graves. Our clothes soon followed, then we tumbled to the soft, cool grass. I gasped at the chilly touch of the earth, but enjoyed all the stimuli my senses took in. It was like bathing in sight, smell, and touch.

An owl hooted close by, and my arms tensed around his shoulders as we kissed. Then I giggled, and so did he.

"You're jumpy," he said, as he kissed his way down to my nipple, then took the hard tip between his teeth.

"Places like this still spook the little girl in me," I said, stopping him before he could flick his tongue over my clit. "Hey, let's 69. Keeps the pleasure even Steven."

"My name isn't Steven," he said, giving my butt a playful slap as I straddled his face.

"That was weak." I gave an exaggerated groan at his bad humor, then lubed up my hand with some spit before I coiled it around his hardening cock.