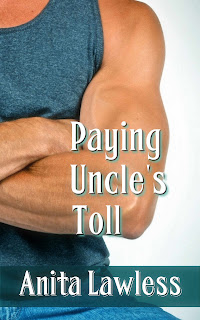 Excerpt: I stood outside the toll booth, finishing the last drag of my cigarette. The August night was hot and humid, and I wished it was my day off. My friend Kimmy had called earlier, asking if I was interested in a double date. Hot British twins who were crossing the country on motorcycles. I pouted, and felt disappointment hit me in the gut when I had to turn her down. Double date was our code word for a double penetration opportunity. Oh well. I hoped Kimmy would have a good night at least.

Headlights made me squint as I ground my cigarette butt into the moist earth. I popped some spearmint gum to kill the ashtray breath. With a sigh, I headed inside.

A silver, two door sedan pulled up to the window. I tucked a strand of black hair behind my ear as I slid the bottom half open and leaned out. When I saw who my visitor was, I smiled wide.

Uncle Robert smiled back. His green eyes were bloodshot, and he looked exhausted. But he still looked incredibly hot. His short, salt-and-pepper hair was done military style. He had a face that could've been sculpted from marble.

He'd been my uncle by marriage for three years, and I'd lusted after him from the moment I met him. Aunt Sheena met him on a singles cruise, or so Mom told me. But after a brief marriage, Sheena was shouting for divorce. It seemed nothing Uncle Robert could do for that woman was good enough. I had to feel for the man. He was a quiet type of tough guy that always reminded me of Charles Bronson. He didn't show his feelings all the time, sure, but I knew this break up with Sheena was hurting him bad.

"Long day at the office?" I asked as he handed me some coins.

He gave a tired grin. "Boy, was it ever." Then he sighed. "Wish I could say I was looking forward to going home."

I leaned out the window to give him his change, flashing him a sympathetic gaze as I did so. I noticed he glanced at my generous cleavage, popping out the top of my tight tank top. So I let my touch linger, stroking his lined palm seductively before I pulled back.

He stared at me, and I crossed my arms under my boobs, squeezing them together so they spilled over the top of my shirt even more. "You know, it's really slow tonight. You're my first car in hours. Wanna come in for a cup?" I held up my mug of cold coffee.