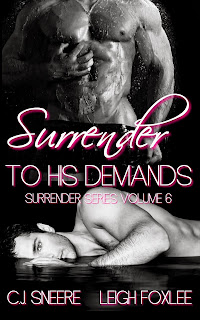 About: Man love inside Surrender Inc.

Surrender To His Demands is Volume 6 of the Surrender Series, which continues the story of Surrender Inc., an exclusive pleasure resort / club franchise where the elite go to play. This is a gay romance with a scorching heat level.

With Christmas just around the corner, Chad Roberts faces eviction from his tattoo shop and apartment, thanks to a vindictive landlord who used to be his lover. Then, through his best friend Laura, he meets Nikolai Nichvalodov--a magician who is part of a billionaire Russian family and is the cousin of Surrender Inc. board member Dmitri Nichvalodov. A member of Surrender himself, Nikolai has a proposition for Chad that will help him keep his ex off his back, but the down on his luck tattooist just might lose his heart in the process.


Excerpt: We arrive at the Hermes Theater at 8 pm and take our seats in the orchestra area. The theater has been recently restored, and cherubs blowing horns adorn the ceiling. The beige walls are trimmed with gold, and deep burgundy curtains drape the black stage. Balcony seats draped in similar deep red jut out from either side of the stage, looming high above it.

The lights go down and Laura grabs my hand, gives it a squeeze and gives me a wide smile. I return it, but I’m not expecting much. Maybe it’s just my bad mood lingering from the crappy news Isaac’s note delivered. Truth is, I’ve never been big on magicians. Sure I’m seen Damien Lane and Rick Seraphim, the two big ones out there these days, and their tricks are impressive. But I can be a hardcore cynic and I’m not easily impressed. From what I’ve heard about Niko, he’s a magician past his time and on his way out. If it weren’t for his family’s connections, he’d probably be forgotten by now.

A disco ball spins above the stage after the curtains part. The lights dim and ominous music plays to get us in the mood. I glance around, finding the place is packed. So maybe Niko isn’t as washed up as I think, or maybe his family pays people off to come see the shows.

Stop being a jerk, I scold myself. After all, the ticket was a gift from Laura and I shouldn’t be so ungrateful. So I focus forward and try to enjoy the show.

After some flash and pageantry during the opening, Niko gets to the tricks. He does a couple with cards to warm up and get the show rolling, then does a few impressive sleight of hand illusions. Next his assistant, a pretty brunette dressed in a sparkling blue mini, wheels out a box and places it at the center of the stage.

Niko is an intimidating and strikingly handsome man. I’ve only seen his photos on a few occasions, when the local papers have covered his shows. He’s tall and barrel-chested and walks straight and proud as he performs. He wears a trimmed, black beard that accentuates his pale skin and icy blue eyes. Now he turns to the audience in his tuxedo and begins to open panels on the box that sits atop a table.

“You will note there are no tricks, no secret compartments.” His voice booms out as he speaks to the crowd. He raps the top of the box with a massive fist. “Once the lovely Jemma is inside, she has no way of getting out. No hidden escapes.”

Another man also clad in a tuxedo brings out a buzz saw as Jemma, Niko’s assistant, climbs inside the apparatus.

“Now, ladies and gentleman,” he says, sweeping his arms wide. “I will saw Jemma into three pieces right before your eyes.”

I can’t help rolling my eyes. This trick is as old as god, if I believed in one. Thankfully Laura doesn’t notice my disdain.

But, somehow, Niko does. Those icy blue eyes focus on me and he calls out, “Excuse me, sir. Do you doubt my claim?”

The spotlight pins me and my eyes go wide. I hate being singled out, and my anger gets the best of me. “Not saying you can’t do it. I just think the trick is a little dated.”

Niko arches an eyebrow. “Perhaps you’d be more impressed if you came up here and watched?”


And don't forget our Heat Up November Sale! Only two days left at Amazon and one at AllRomance and Bookstrand! 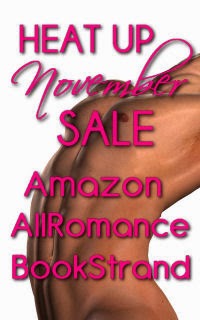