Man Love Omnibus (14 Ebooks in One) by C.J. Sneere 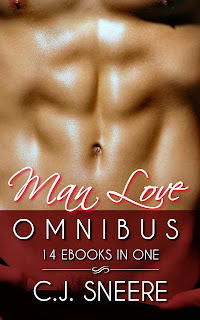 About: Get fourteen stories of scorching man love in one volume with C.J. Sneere’s Man Love Omnibus. This omnibus includes all of C.J.’s single titles, plus The Story of Jack & James, the tale of a punk rocker and a young man lost who found himself through love. You also get the complete Waking Up Werewolf series, which is filled with monster man love ménages.

Jacob is on the prowl for a pick up. Don't mistake him for a player, though. He's careful when he scopes out prime man meat. He brings home a quiet French Canadian named Andre, who's a cross between demure school boy and bad boy biker. However, a surprise greets Jacob Monday morning, when he finds Andre is now an employee of the gym he also works at, and his hook up seems less than happy to see him. Sparks fly and things get hot and sweaty in the locker room.

Tom has lived most of his life trapped in a lie. Raised in a strict Christian family, he toed the line according to his father and mother's wishes. But now he's undeniably attracted to his sexy bosses, who also happen to be life partners. When they offer him a weekend island excursion, he finds they're just as attracted to him, and things heat up between the trio at sea as well as on land.

The Story of Jack & James (The Complete Jack The Lad Series - M/M with M/M/M/M scenes):

The complete Jack The Lad series includes five stories plus a bonus tale. The story of a punk rocker and a young man lost who found himself through love. This book concludes with the wedding of Jack and James. The day of their nuptials includes a quickie before the ceremony and a showdown with a drunken, dejected father. Please join the partners later in their honeymoon suite for chocolate eaten off of heated skin and tasty body paint.

Warren Lindstrom has it all--a lovely girlfriend, a great job, a loyal dog--but it all comes crashing down around him after a werewolf attack lands him with lycanthropy and he's introduced to an underground world full of monsters. Now Warren must help a sexy vampire clear his ex-lover, a brawny troll, of a murder rap, plus bring down an organization called Purity, who want to wipe monsters off the face of the earth.

An urban fantasy erotica series from C.J. Sneere. Welcome to the underground, where monsters rule and sex becomes an adventure.


Excerpt from Waking Up Werewolf Part 1:

Warren appreciated the perfect life he now possessed. He just doubted it would last. He chided the cynic in him for being unappreciative as he walked his and Tamara's dog, Tulle--a Boston Terrier / Beagle mix who had to sniff everything within her path.

"That tulip smells the same as the last one you smelled," he told the dog, bending down to give her short coat a pet. "And, anyway, tulips don't even smell, do they?"

Yes, life was good. No, great. He'd just been promoted to head ad designer in his department at his advertising firm. Tamara had moved in with him six months ago, and their relationship had deepened. He'd decided it was time to pop the question. But, first, there was something Warren had to tell his girlfriend of two years.

It was time to come out of his closet and admit he was bisexual. If he and Tamara were going to spend the rest of their lives together--and Warren didn't plan on getting divorced--then she needed to know everything about him. He wanted no surprises after they said 'I do.'

He thought about their honeymoon as he and Tulle strolled down a walkway domed by hedges grown in arches.

"What about Queen Charlotte Islands, hmmm, girl?" The dog just sniffed another tulip and ignored Warren.

But he thought a trip to Haida Gwaii might be just the thing. He'd never seen the islands of his ancestors, though Grandma had told him what she remembered of Moresby. Even though he lived in Richmond, relatively close to the place of the Hadia Nation, it might as well have been a world away.

Particularly when he was a kid, and he and Gran had to make due on her tiny pension and some left over from his parent's insurance. He'd been a Surrey boy back then. How far he'd come, he mused.

Little Tulle stiffened, and the short hairs along her spine stood up. She curled her lip and focused forward as she let out a low, warning growl.

Warren held the leash tightly and shielded his eyes against the harsh glow of the globular streetlamps. At first, he saw only darkness and hedges, but then something shifted in the shadows. Something with massive shoulders hunkered low at the end of the walkway. It rose up a bit, and he caught a glimpse of pointy ears atop a shaggy head.