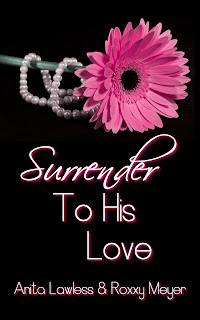 Excerpt: Carrie Brannigan is a single mom with too many bills and two kids to raise. Her only help comes from her best friend Jake Black, a burly carpenter who rents the apartment above her garage. Until she applies for a job testing designer sex toys with a dangerous and sexy dom. In Part 4 of the series, Jake is caught in bed with the nanny, who he moves in with, but he returns to perform with Carrie and Dom Luke for the major shareholders of Surrender at the exclusive Sanctuary resort. Can the dom bring his two lovers back together, or will the three part ways after their play is done? Find out in the thrilling conclusion to Surrender Series Volume 2! Full collection coming soon!

Excerpt: Dom Luke shows up at the boys’ school just as I’m dropping them off. They catch a glimpse of his vintage Rolls and ask if they can come say hi with me. They’re both fascinated by my strange new boss and thankful for the gifts they’ve received because of the generous wage he pays me. After I shoo them off toward the school entrance, I ask why Luke is here.

“I’d like to discuss your performance at Surrender Sanctuary this weekend,” he tells me as he holds the passenger door of his expensive car open for me. “Is Jake with you?”

The unflappable dom shrugs. “I’ll send someone to fetch it for you.” He pats the passenger seat. “Get in.”

I give him an exasperated sigh, but I know there will be no denying Luke when he wants it his way. I slide onto the expensive leather seat and let him whisk me back home.

My boss is a sex toy inventor for the exclusive sex resort and club franchise, Surrender Inc., and I test and perform with said products for him, as does my best friend Jake Black. Jake also rents from me and helps me take care of my two kids, Preston and Michael. But sparks have been flying between myself and Jake since we took this job. He’s not exactly happy about it, even though we need the money. He’s challenged by Dom Luke in many ways, but now I have a challenge of my own. Our new nanny, Kaley Porter, who Jake seems to be hot after. They’ve been nonstop flirting ever since Dom Luke helped me hire the woman. While I have no real claim over Jake, I admit I’m jealous as hell.

I know, how hypocritical of me. I expect Jake to share me with Dom Luke but don’t want to share him with another woman. I guess I’m just stingy about the men I love.

When we drive up to my place, I’m surprised to find Kaley’s car outside. A knot of dread begins to form in my stomach.


Also be sure to check out All Romance for our upcoming book a day giveaway offering--50 Shades of Fairy Tales: Wild & Lawless Collection No. 1.  Enter here by posting. We'll be blogging it officially in a day or two to remind readers as well. Our pals at Courtesan Press also have their first fairy tale collection up for grabs, so don't miss out!