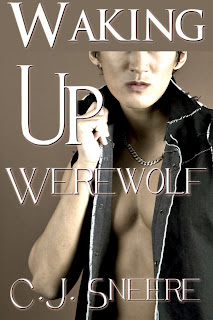 About:  Warren Lindstrom thinks he has it all. He's about to come out to his girlfriend as bisexual and propose to her. He just got that new promotion at his job. But it all comes crashing down around him after he gets attacked by a werewolf, witnesses a murder, and meets a sexy vampire named Sid. Now Warren must help Sid's ex lover, a troll who has been framed for the murder, and the best way to do that is to climb into Sid's bed.

Excerpt: Warren appreciated the perfect life he now possessed. He just doubted it would last. He chided the cynic in him for being unappreciative as he walked his and Tamara's dog, Tulle--a Boston Terrier / Beagle mix who had to sniff everything within her path.

"That tulip smells the same as the last one you smelled," he told the dog, bending down to give her short coat a pet. "And, anyway, tulips don't even smell, do they?"

Yes, life was good. No, great. He'd just been promoted to head ad designer in his department at his advertising firm. Tamara had moved in with him six months ago, and their relationship had deepened. He'd decided it was time to pop the question. But, first, there was something Warren had to tell his girlfriend of two years.

It was time to come out of his closet and admit he was bisexual. If he and Tamara were going to spend the rest of their lives together--and Warren didn't plan on getting divorced--then she needed to know everything about him. He wanted no surprises after they said 'I do.'

He thought about their honeymoon as he and Tulle strolled down a walkway domed by hedges grown in arches.

"What about Queen Charlotte Islands, hmmm, girl?" The dog just sniffed another tulip and ignored Warren.

But he thought a trip to Haida Gwaii might be just the thing. He'd never seen the islands of his ancestors, though Grandma had told him what she remembered of Moresby. Even though he lived in Richmond, relatively close to the place of the Hadia Nation, it might as well have been a world away.

Particularly when he was a kid, and he and Gran had to make due on her tiny pension and some left over from his parent's insurance. He'd been a Surrey boy back then. How far he'd come, he mused.

Little Tulle stiffened, and the short hairs along her spine stood up. She curled her lip and focused forward as she let out a low, warning growl.

Warren held the leash tightly and shielded his eyes against the harsh glow of the globular streetlamps. At first, he saw only darkness and hedges, but then something shifted in the shadows. Something with massive shoulders hunkered low at the end of the walkway. It rose up a bit, and he caught a glimpse of pointy ears atop a shaggy head.

And it's your last day to get Surrender To a Sex Therapist, Part 1 of the Surrender Series, for FREE! Click the link here, below, or the book cover to grab your copy now. Thank you tons for all the downloads, readers! We hit over 1000 this time. You're great!

About: Charlotte Hanson loves her new job as secretary to a prominent sex therapist, Dmitri Nichvalodov, who also happens to come from old money. This Russian billionaire isn't hard on the eyes either, and he prefers to live a simple life doing a job he loves. At least, that's what Charlotte thinks, until he proposes she become his sex mistress. Now the contract is on the table, and the money offered would help care for her ailing father. Will she sign the papers and surrender?
Posted by Unknown at 13:28