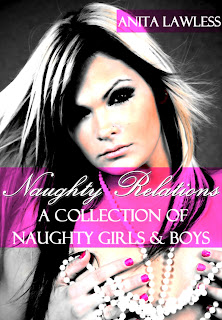 Doing My Ex's Daddy: Cara is a naughty nineteen-year-old. She stole a sex tape from the private collection of her ex-boyfriend's father. Confession time comes, but there's more than truth telling on her mind. However, her ex's daddy, Jason 'the Juggernaut' Reinhart, former pro wrestler, thinks she needs to be punished. While he's in the process of disciplining her, his son walks in.

Bound & Blindfolded: Emily runs an antique bookstore that sells rare occult books. This is how she meets Ville Jorgensen, a drummer and song writer for a local black metal band. Most folks in their small city think Ville and his ilk are weird, but Emily is intrigued by this musician who also studies esotericism. They develop a friendship that leads to sexual role playing. He takes her to his home in the woods, where she experiences his dungeon.

Betting On Sex: Carlie just lost her job, & there's only 50 dollars left in her account. Now her handsome, much younger landlord--who also happens to be a cousin through marriage--wants his rent. She can't pay, so Josh decides to propose another form of payment. One involving teeth, tongues, & lots of sex. But what Carlie doesn't know is Josh had this planned all along, and he's betting on sex to win her body.

Hostage of Lust: Jim "Big Man" Davies is on a mission to save his marriage. This now retired pro-wrestler fears his wife has fallen for a much younger man. So, one weekend, he decides it's time to play the game. A role playing scenario his wife, Tara, has always fantasized about. Armed with manacles, a blindfold, and sex toys galore, he only hopes she'll fall back in love with him when he's through with her.